Western Canada With Inside Passage 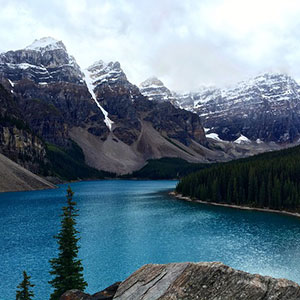 Take a fantastic adventure on this affordable guided vacation in Canada. Begin in Vancouver with a tour of the city, including Stanley Park, Chinatown, the harbor, beaches, and more. Cross the Strait of Georgia by ferry to Vancouver Island for sightseeing, including Butchart Gardens. Spend a free day in Victoria as you please-from whale watching to afternoon tea. Embark on your Inside Passage cruise from Port Hardy at the northern end of the island. Cruise through spectacular scenery to see mountains, waterfalls, islands, and rainforests. Watch for sea lions, eagles, porpoises, and orcas! Disembark your ship for two overnights in the historic fishing village of Prince Rupert. Take a guided tour of British Columbia’s oldest cannery village. Board your VIA Rail train through the mountains, following the mighty Skeena River to the Pacific Coast Rainforest. Retrace the ancient steps of the First Nations and fur trading routes while keeping watch for eagles, bears, and moose. Ascend the Canadian Rockies peaks to the highest, 13,000-ft. Mount Robson. In Jasper, take in the unspoiled beauty with an optional excursion to Maligne Lake and Spirit Island, or to hike, shop, or relax. Coming down the western slopes of Alberta, you’ll roam the 750-foot-thick Columbia Icefield in the all-terrain Ice Explorer. Take in the crystal blue waters of Lake Louise reflecting the surrounding peaks and glaciers. Witness more gorges, snowy peaks, and alpine lakes of green and blue as you approach Banff National Park. Explore the park with hiking, boating, horseback riding, fishing, or join us for an optional helicopter tour of the Canadian Rockies. This amazing value tour is jam-packed with beauty and adventure that’s not to be missed.

British, and darn proud of it.

The shops are stocked with Harris tweeds, Irish linens and Scottish woollens. The locals play croquet, double-decker buses wend their way through the well-kept streets, and afternoon tea is served daily at the Empress Hotel.

In fact, genteel Victoria, British Columbia so closely resembles an English seaside town that it almost seems out of place among the majestic snow manteled mountains and cedar forests that surround it. This juxtaposition, of course, only
adds to its charm.

Prices are per person, land or cruise only, based on double occupancy. Offer subject to availability and change without notice. Some restrictions may apply. Please ask us for details.

Charges not included in the land vacation price: airfare to and from the start of your vacation; airline baggage fees including checked and/or excess baggage fees; Federal inspection fees for the Federal U.S. Customs and Immigrations; agricultural tax; other per person taxes imposed by government entities; applicable cruise taxes, fees, fares and port charges; passports; visas and vaccinations; transfers; tips to your Tour or Cruise Director, Local Host, driver, Local Guides, and/or ships’ crew; gratuities on ferries, trains, and cruise ships; laundry; telephone; minibar; alcohol, beverages, and food outside of the contracted menu as presented at a hotel or restaurant (these extra items will be billed to you before leaving the hotel, ship, or restaurant); additional excursions and activities not listed as ‘included’ in the itinerary; porterage at airports or train stations; Travel Protection premiums; and all other items of a personal nature.

Request A Quote Send To A Friend Have A Question? Contact Us

Send To A Friend

Please don't close or refresh the page while we are processing your submission
Please be patient, this could take a few minutes.